Peter:
You were one of the first to create a virtual analog synthesizer. Did you share your knowledge with others?

Dave:
The EMAX II was the first E-mu product to use the „H-chip“, our digital filter chip.  The intent of the chip was to make digital filters sound „analog,“ and obviously we succeeded.  There’s actually a technical paper by me with that title – „Making Digital Filters Sound Analog.“  It’s online if you google it.

Peter:
And then I’m wondering that both AKAI and E-mu didn’t have anything to come up with against the first software-samplers like the EMAGICS EXS-24 or STEINBERGS HALION. As a big fan of E-mu I’ve been waiting for the first plug-in version of the emulator. What happened?

Dave:
As early as the late 1980’s, Scott Wedge and I envisioned the underlying technology of hard-disk based samplers. In retrospect, we probably should have patented those early ideas, even though they couldn’t be used in an affordable instrument at that time. Back then, of course we had been thinking of building keyboards or modules, not computer software. Nonetheless, had we protected our ideas, we might have established a position from which we could have entered the software market effectively. At various times, E-mu considered seriously pursuing software products. But the structure of software companies is radically different from hardware companies. Hardware companies have purchasing, PCB and mechanical engineering, inventory management and production departments that are virtually absent in software companies. It’s very rare for a hardware company to become cost-efficient producing software products. At the time, E-mu was struggling to become consistently profitable, and incapable of making the radical changes that would allow us to effectively compete with the lean software synthesizer companies.

E-mu did create the Emulator X. It’s a very nice software product, but was originally released bundled with the E-mu branded sound cards and I/O modules. When released stand-alone, it wasn’t competitively priced. All this is really because we weren’t structured to be a software company. 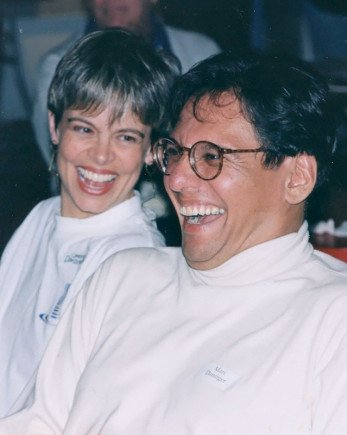 Further information about this foto:

One of the UCSC muons of  the summer of 1971 – Marc Danziger with his wife, taken at the 25th anniversary celebration.  Marc built the cabinet for the E-mu 25, and did a lot of other mechanical and graphics stuff for the prototype.  He is now a technology strategist in Los Angeles.