The keyboards of the E-Mu IV-Series were regarded as mechanically very accident-sensitively.

Peter:
As far as I unterstood, you didn’t work directly for E-mu then?

Even though Creative was highly supportive of E-mu within the music industry, there were undercurrents of resentment toward Creative within E-mu, and sometimes these were counter-productive. I’ll give an example.

In the early 90’s, we developed a 16 bit effects engine for our products, based on an Analog Devices 2105 DSP chip. Because it was 16 bit, its fidelity was limited. At the same time, I was developing the EMU8000 chip for Creative’s sound cards, which included a custom 24 bit effects engine. Internally, the EMU8000 was called the “G0.5” because it used a cost reduced G-chip algorithm for pitch shifting. The EMU8000 cost almost nothing, due to Creative’s volume, and I had carefully designed it so E-mu could bypass the sampler and use just the effects engine with our G and H chips. But I encountered huge resistance to using a “cheap” Creative chip in E-mu’s products. Finally, somebody put together a double-blind test and everybody overwhelmingly agreed the EMU8000 sounded much better than the 2105. But we delayed 2 years in making that improvement simply because a few decision makers thought “Creative” meant inferior sound quality.

Dave:
Creative’s purchase of Ensoniq in 1998 is quite a different story, and really has nothing to do with the music marketplace. As Microsoft promoted “plug-and-play” technology, they forced the Sound Blaster standard that had made Creative successful into obsolescence. In a big meeting, the top Creative engineers discussed what could be done. I asked the Singapore based software team, “Are you absolutely certain there isn’t some clever hardware/software trick that could be used to get around Microsoft’s requirements?” I was told no, they had proved this was impossible, and, to my eventual shame, I didn’t make any effort to dig deeper.

Ensoniq’s engineers figured out that clever trick, and as a result were able to make a sound card that was very competitive with the Sound Blaster. Creative’s response was to buy Ensoniq, and as Chief Scientist I helped pave the way for that acquisition. We all (Creative’s executives, E-mu folks, and most of Ensoniq’s engineers) hoped that Ensoniq technologies, products, and talent could benefit E-mu. But for various reasons, we were never able to effectively use what Creative had purchased. 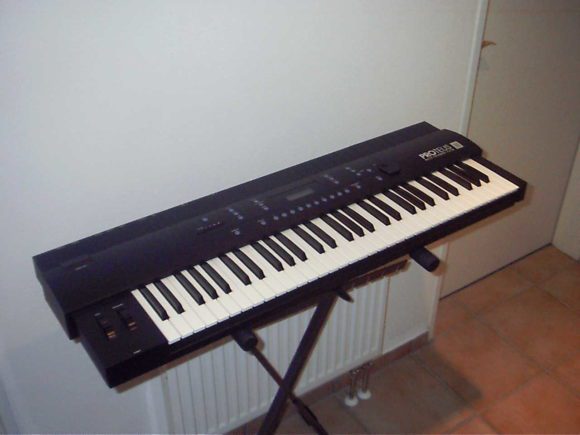 The Proteus as keyboard with the name „MPS“.