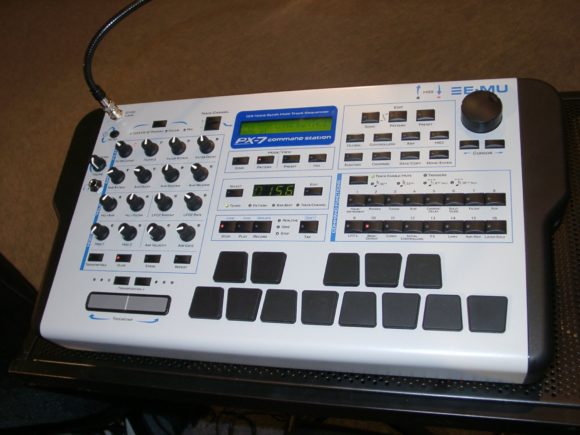 Rarely to be found was the PX7, specialized for Drums & amp; Percussion.

What is your personal career progress within E-mu and when did you leave the company for good?

For many years, I was excited and delighted working with Creative. They smoothed out our financial ups and downs, funded development of many projects, from Morpheus and EIV through Darwin and Proteus 2000, and were very supportive about E-mu’s prospects. I was involved in chip development, both for Creative and for E-mu. Our digital VLSI designers developed chips for Darwin and a wonderful effects engine for E-mu synthesizers. We were also doing cutting edge research at the Tech Center into really interesting advanced music synthesis techniques. Things were very promising.

But sadly, E-mu was not thriving. The digital music studio project failed. While the sound modules continued to sell, nothing took off like the original Proteus. It seemed like the wonderful rapport between engineering and marketing that fueled E-mu in the 80’s and early 90’s just wasn’t there anymore.

In 2001, Sim asked for my support. E-mu had been losing money – though not a lot – consistently since the acquisition. Creative was no longer booming; he was under pressure from his board to make broad cuts. Sim felt his board would insist on shutting E-mu down. He proposed giving E-mu a choice – either decide to stay primarily in the music market and become profitable or die, or move to the computer peripheral market. He convinced his board that if E-mu did that, the technology spin-offs to Creative would cover any losses.

I supported this proposal. I felt that Creative had more than honored their word to E-mu. Now they needed us to stop losing money – we could make a responsible choice. In the end, we muons chose the safe path, moving into computers, though ultimately that wasn’t profitable either.

It’s hard to describe exactly how I feel about it all. Creative supported E-mu beyond any expectations. Sometimes in my dreams I feel like I abandoned E-mu, but I don’t feel so in my waking hours. We always knew music is a tough market – “your customers are always broke.” I’m certainly sad that E-mu didn’t survive. But I’m not sure that if E-mu had survived, it would still be the E-mu I created and loved. I’ve said a lot about E-mu’s profitability, but for all of us, music was the focus. Profitability was just what we needed to make more music tomorrow.

Peter:
What do you think about E-mu’s progress since the takeover of CREATIVE LABS? Aren’t you sad about that?

Dave:
As I mentioned, after the Creative acquisition, I first directed the Tech Center, then became Creative’s Chief Scientist. That position involved a lot of education (I would teach Creative’s engineers in Singapore about everything from circuit theory to DSP), technology evaluation, and public speaking. In 1999, with my son in high school, I chose to “semi-retire,” cutting my hours back to about half-time. I stayed in this mode until about 2007, when Creative asked me to once again be involved in chip development at ATC.

My good friend Dana Massie, who started at E-mu in 1983 and was responsible for many E-mu DSP innovations, had been trying to recruit me to join him at a Silicon Valley start-up, Audience Inc. In 2011, Creative finally had to pull the plug on E-mu. This was particularly hard on me because it was the only time Creative took an action involving E-mu without discussing it with me first. So I decided I no longer owed them my loyalty, and took the job at Audience. I became Sr. Director of Architecture, and got to work with Dana and many other former E-mu and Creative ATC employees again. While it was fun working on mobile phone audio chips, in 2014, I began to realize how much I missed the music industry. I reluctantly left Audience in early 2015.