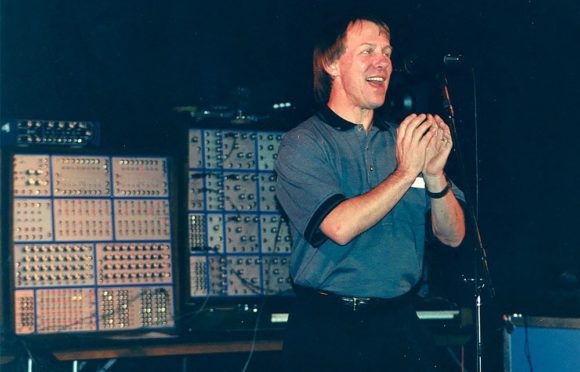 Dave 1997 during the 25h anniversary together with his „modulars“

Peter:
Several different E-mu chips were developped in the course of the years. All of them were termed only with a single letter. Could you please give us a short overview of all these chips and their meaning?

Dave:
The E in E-chip was of course for E-mu. The F-chip had, at its heart, an FIR filter that attenuated “clocking noise” by 2x oversampling the channel. The G in G-chip was taken from one of the authors of the technical paper that introduced us to high order interpolation – Phil Gossett and Julius Smith – and we called the algorithm “Gossett-Smith.” The H-chip was named for the engineering notation for a filter transfer function “H(z)”. After that, we abandoned the alphabetic sequence and developed, among others, a K-chip (keyboard scanner), and an R-chip (reverb and other digital effects).

Peter:
Back to the details. After the E-Chip came?

Dave:
The G and H chips were a big leap forward. Through the Emulator III, each sampler channel was an independent synthesizer, operating at its own variable sample rate. In contrast, the PPG Wave, Ensoniq Mirage, and other competition used the “drop sample” method: all channels operated at the same sample rate, and pitch shifting just dropped or duplicated existing samples. While there was great engineering and economic benefit to using one sample rate, the drop sample approach produced unacceptable distortions with many sounds. Mathematically, any single sample rate approach uses “interpolation.” Drop sample is the simplest (what we call “order zero”); linear (“order one”) interpolation gives somewhat less distortion, but was still not good enough for us. The G-chip was my vision for an “order seven” interpolator that would have no audible distortion; the H-chip was to be a companion dynamic digital filter with an analog sound.