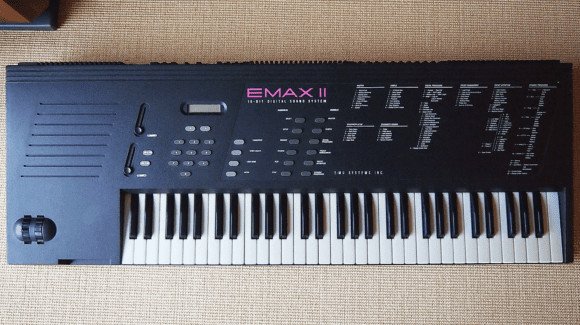 Peter:
And then you decided to build the EMAX II with a 16-bit Engine and in Stereo. As far as I remember was it a pretty popular sampler as well, wasn’t it?

Dave:
We weren’t ready to discontinue the EIII when the H-chip came back, but the Emax badly needed an upgrade. Emax II was a misnomer – its hardware was G and H chip based, nothing like the E-chip, and its underlying software base was more EIII than Emax. (For example, the EIII was where we introduced stereo sampling.) The main thing it kept from Emax I was the housing. I was once told that we should never have called it Emax II –this was like Ford naming a car “Pinto II.” (The Ford Pinto was well known in America as a cheap, unreliable car.)
The Emax II was a great product, popular and exceedingly reliable. Unlike the Emax, felt like we delivered everything we promised and more.

Peter:
Who worked on the SE-Synthesizer for the EMAX? Why was it used in the EMAX II and then not in the later E-mu products?

Dave:
The SE technology was a skunkworks project headed by our engineer Tony Dean. The Emax, EIII, and Emax II all used the National Semiconductor 32000 series processors, which could be programmed efficiently in ‘C’. Tony found it easy and fun to write the SE synth. His demonstration convinced us it was a nice, simple enhancement to the product. It was originally called Spectrum Interpolation Digital Synthesis. But at the time, there was a major health concern in the US, Sudden Infant Death Syndrome. So we had to avoid calling it “SIDS,” instead it was generally called “Spectrum Synthesis”. There’s no good reason why this didn’t continue in the main E-mu software line. The user interface was a bit tedious, but it made some interesting sounds, and once designed, the cost to include it was small. I’ll bet the reason was simply that as we transitioned from the 32000 CPU to the Motorola 68000 family, the EIV software team didn’t feel it was worth the effort to port the SE synth.