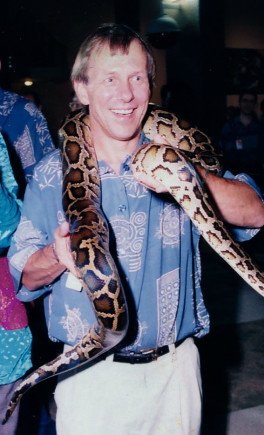 1996 Dave Rossum in Singapur, he likes snakes… He took a boa from the snake charmer to accompany him during the celebration at CREATIVES.

Peter:
From 1989 the positive image of the Emulator III caused a big business for the Proteus Series. Was´t the first Proteus a great sensation?

Dave:
The Proteus was internally first called “the plug,” because we had a big hole in our revenue due to the EIII reliability problems, and needed something to plug into the product map as soon as we could. The product concept was simply “the quickest thing we could design that made music using the G-chip.” As the product came together, there was great debate about the sound ROM content. Some lobbied for a few great EIII samples, but Marco insisted that we put a full complement of pop/rock instruments in our allocated 4MB. The sound department expressed great concern over the sound quality, but remember, this was when the G-chip was brand new, and none of us realized how great it was. The sounds were compressed and compressed again, and still sounded fabulous. Then Herb Jimmerson did the demo sequence, and we all were blown away. That was when we realized we had a sure winner. I gave Bob Moog a personal demo of the Proteus at NAMM; this was when he was consulting for Kurzweil. His last question was “How much memory?” When I told him 4MB, his jaw dropped and he said “Amazing,” shaking his head in disbelief.

Popular member of the Proteus-Series, ProCussion

Peter:
And its name?

Dave:
The name Proteus derives from the Greek god, known for its constantly changing nature. It classically connotes versatility, mutability, and the capability of assuming many forms. But like many E-mu names, there is a double meaning – “the plug” changed from a product designed as quickly as possible to bridge a revenue gap, to a revolutionary instrument.

Peter:
It was not deliverable for a long time… What happened?

Dave:
The G-chip, made for us by LSI Logic, used LSI’s 16×16 pipelined multiplier-accumulator cell as the heart of its DSP math engine. The prototypes worked perfectly, but when LSI made the first production lot in January 1989, those chips drew too much power. LSI build another lot in March, and those had the same problem. By May, they had determined that the problem lay in their multiplier cell; it took until August for them to find the root cause. There was a “design-rule violation” creating a tiny short-circuit. This had been fixed months before for other customers, but somehow the E-mu design was missed. Finally, new masks were made, and a production lot was scheduled for late October. On October 17th, 1989, a magnitude 6.9 earthquake occurred with epicenter just 5 miles from E-mu. Our company did OK – we were back in full operation in a couple of weeks, but at LSI’s fab 40 miles away, the G-chip production batch was ruined. I think we finally got the first batch of production G-chips in December 1989.