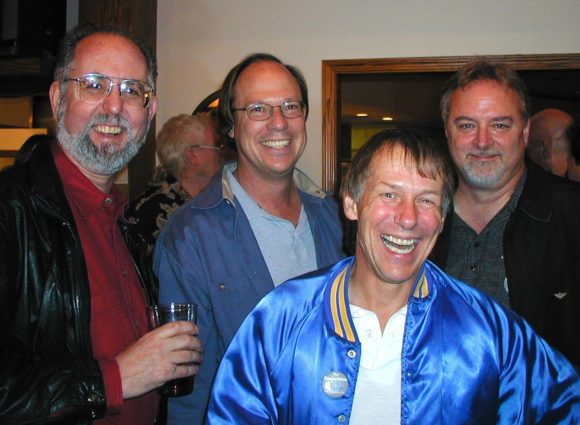 A few facts about this foto:
We were the four central people of E-mu Systems.  Me, of course, you know.  Scott Wedge was E-mu’s co-founder, as described in the interview. When E-mu was acquired by Creative, Scott stepped down as CEO (Creative didn’t need a CEO), and has been „gainfully unemployed“ since.  He’s tinkered a bit on an invention for aircraft communications audio, but never got back into industry.

Marco Alpert began working with E-mu in 1976, and was E-mu’s VP of Marketing for many years.  He left E-mu in 1994 to join Akai as a strategic marketing consultant.  For the past 17 years, he was Vice President of Marketing at Antares, a job he left in November 2014.

Ed Rudnick was E-mu’s first employee, joining us in April 1973.  He had stints as Chief Technician, VP of Manufacturing, and head of QA.  Ed succumbed to cancer in 2008, and we all deeply miss him.

It was pretty obvious that the synthesizers with many faders and knobs became attractive again for musicians. And of course also the analog-sound. You started your career with modular synthesizers. Have you never planned to build a modern analog synthesizer instead of releasing one after another Proteus?

Dave:
I have always understood that musicians relate to their instruments physically, and that knobs, switches, and even patch cords are part of that relationship. For me, even the feel of the knobs was critical. In the E-mu modular, for example, I insisted our knobs be machined aluminum rather than the plastic used by Moog and others. But cost drives price, price drives volume, volume drives profitability. Knobs, switches, and jacks are the most expensive part of modular music synthesizers. They (and analog circuitry too) don’t follow “Moore’s law” and get cheaper every year the way digital electronics does. 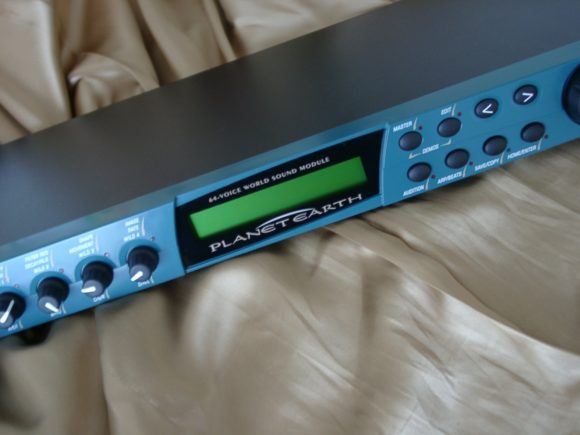 Planet Earth, a member of the big Proteus-Family

Peter:
In contrast to other big names as Moog, Arp, Sequential Circuits or Oberheim you digressed from analog synthesizers at the beginning of the 80s. Why?

Dave:
In the early 1980’s, the modular synthesizer seemed dead – our modular sales had dropped to essentially zero. We sold off all our stock, and never looked back. And the marketplace agreed with us, at least until the mid-2000’s. While there certainly were people (including me) who bemoaned the lack of analog warmth in the digital synths, and missed the array of knobs to control things, and the ability to patch with a cable instead of a mouse, nobody was willing to consider paying the price until very recently. Also, under Creative, E-mu became more risk averse. In the mid ‘90’s, Creative was willing to fund risky projects like Darwin and Ivy. But as 2000 approached, E-mu needed to stick to programs that were sure to come near to break-even, and even then analog synths were unproven in the market.

Making of: Smashing Pumpkins, Mellon Collie and the Infinite Sadness