Peter:
Were you also developing your own synthesizer then?

Yes we were developing the Audity, a sophisticated 16 voice computer controlled analog synthesizer, which we introduced and demonstrated at the AES show in May of 1980. 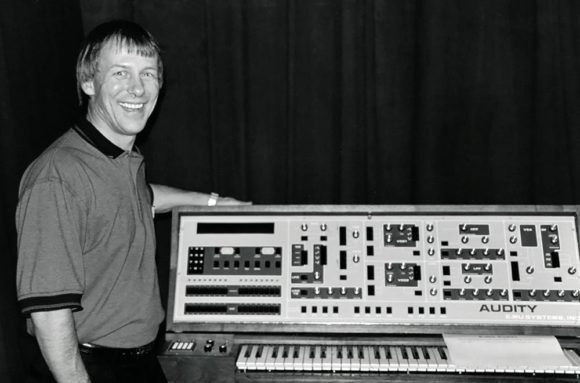 Dave 1997 with the Audity at the 25th anniversary of E-mu. 16 voice cards, analogue synthesizer. According to vintagesynth.com only one copy was produced for Peter Baumann fom Tangerine Dream. He paid the enormous amount of 70,000 USD.

But then Sequential Circuits had decided they were no longer going to pay us royalties for the Prophet 5. We called our lawyers, and though we would probably win a lawsuit against them, it would be expensive. The Audity would take several years to produce the kind of revenue we needed for that – could we come up with another product quickly? The Emulator was about to be born.

Dave:
We held a „council of war“ among our key people: Scott, me, Marco Alpert (then our general manager), and Ed Rudnick (our head technician). We observed the popularity of the Fairlight at AES, but it was clear that most of the features were difficult to use; the sampling capability was the real novelty. We had also heard a simple, two channel digital reverb by Publison with the ability to capture a sound, playing it back using analog control voltages. I had built a prototype DSP synth voice, and had worked with Roger Linn on the LM-1, so we understood sampling. It was clear to us that a keyboard sampler, far cheaper and easier to operate than the Fairlight, would be a success in the market.

Peter:
Fairlight was number one on the market for samplers at that time. But you had to pay around $35.000 for it. How did you proceed to compete with Fairlight?

Dave:
The Fairlight voice cards each had their own separate memory and processor to output the digitized 8-bit linearly coded audio samples to the voice card’s DAC. Musicians primarily wanted a polyphonic instrument, not necessarily a multi-timbral one. So the expensive separate memory for each voice was a huge waste. I knew I could make a single Z-80 CPU with DMA (Direct Memory Access) chips handle eight voices from a single memory. A banked memory structure let the Z-80 address 128k bytes of RAM; I attached my custom floppy disk interface. While the sample size was only 8 bits, companding DACs extended the dynamic range to give a better sound than 8 bit linear PCM coding. We were able to sell an 8 voice system for $10,000 with good margins.

Jimi Hendrix: A little story about a song – Hey Joe