Peter:
Who were the first famous musician buying an Emulator II?

Dave:
After the layoff, simply driving to work at E-mu’s office in Soquel brought sad memories. This changed when we finally began shipping the Emulator II. We invited musicians Alan Howarth, Steve Pocaro, Jerry Harrison, Ed Simeone, Max Strom, and Herb Jimmerson, all of whom were long-time E-mu supporters and initial customers for the E2, for a weekend of preview, training, and then delivery of the first production units. That weekend generated so much excitement and enthusiasm that all the pain of the E2 layoff was forgotten. We were back in business!

Other than being involved that weekend, I didn’t do much celebrity hob-nobbing. But I loved discovering where the instrument was being used. From hearing the violin riff in a Michael Jackson song, to the shakuhachi in a child‘s cartoon score, it was always a delight to discover my handiwork was making great music. Probably the most fun of all was when we Muons went to the Santa Cruz premier of „Ferris Bueller’s Day Off.“ 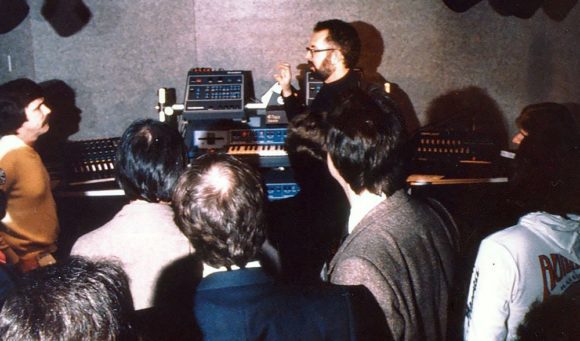 Marco Alpert presents the Drumulator at the NAMM Show (1983).

Peter:
One year later you released the SP12. The SP12 made E-Mu iconic. Was that predictable?