Peter:
Who was responsible for the sounds then?

Kevin Monahan, one of E-mu’s most versatile early employees, was the original sound library champion. Kevin started collecting a huge library of sounds and encouraged our customers to share samples with each other. We even hosted „sound parties“ at studios around the country where Emulator owners could come and swap sounds. Kevin teamed with Dana Massie, our DSP expert, to build software tools for creating the best possible sounds. Soon, E-mu had its own „Sound Department“ that created and customized samples, and put them into presets. We also had our lawyers working on establishing the precedents in fair use law that would define what could and could not be copyrighted with respect to samples and libraries. In later years, Sound Department participation was often the most critical aspect of the success of an instrument.

While we did sell samples and libraries, those sales were never a major source of revenue. The sounds sold hardware, either by being in a ROM, being famous through a hit song, or simply by being available. Piracy was a major problem. At first, our dealers actually worked against us – they would obtain a single library copy, then copy the disks and give them away with every sale. Other manufacturers even stole our library to sell with their own instruments! 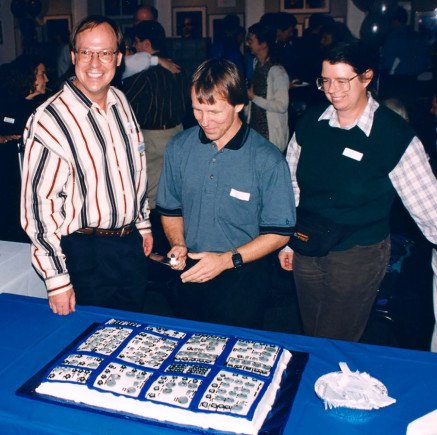 1997, Dave, Scott Wedge and Paula Butler at 25th anniversary of E-MU. What looks like a pillow is a „modular“ cake.