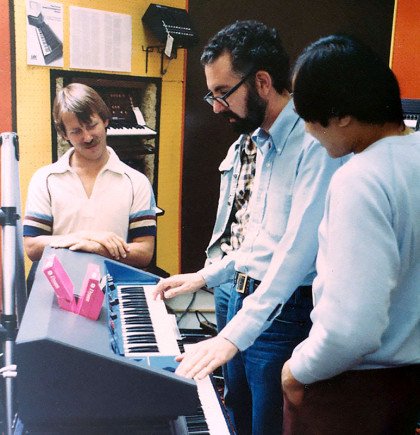 So, was the Emulator a big success?

We introduced the Emulator at the NAMM show in January, 1981. We knew things were looking good when Stevie Wonder, amid his entourage, gave the prototype a big hug, played it for a few minutes, and arranged to buy serial number 001. We had known Daryl Dragon through the E-mu Modular; he had been enthusiastic during the development of the sampler and understood its potential, and he purchased unit 002. Our plans were to produce 5 units a month, and the first 25 units sold like clockwork. Then, in November of 1981, sales dried up completely.

Peter:
But only temporarily, right?

Dave:
Things were so bad that we almost sold all rights to the Emulator to Music Technology (MTI) in December of 1981. But when Scott, Marco, and I met with them to finalize a deal, we realized they had no better idea of how to sell the instrument than we did. We decided instead to do three things: drop the price of the instrument to $8,000, add the sequencer option for no charge, and expand the included sound library from 5 to 25 disks.

Two other important improvements were made. The original Emulator had absolutely no capability to envelope the sample. This meant that if the recording had a long decay, the note would persist well after the key was released. Scott had been on my case for months to find a way to retrofit a VCA on each channel, but adding 8 envelopes and 8 VCAs just wasn’t practical. This was when Scott said the oft-quoted line about me: „Dave has declared it’s impossible. That means it‘s only a couple of weeks until he has a solution.“ He was right –I found a way to use the DAC reference voltage input and a single capacitor to envelope the sound. We retrofitted all existing 25 units, and the Emulator would now quiet down when the key was released.

We also invented multi-sampling. The original Emulator software split the 4 octave keyboard into two 2-octave zones, each with its own sample. We soon discovered that many instruments could not be transposed over a two octave range. Multi-sampling allowed the memory for each keyboard half to be split into as many a six sections, each having a correspondingly smaller range on the keyboard. I wish we’d patented that invention (and many other things about the Emulator 1). We really had no idea the revolution we’d begun.

Peter:
And did it work?

Dave:
We re-introduced the Emulator in January of 1982 with the new price, features and sound library, and came home with enough backlog that we had to ramp up the production rate. The Emulator continued to sell well until we discontinued it in anticipation of the Emulator II.