Peter:
Expectations were huge. The Emulator II had to be a blast. But something went wrong?

We decided to cease production of the Emulator I in advance of announcing the E2 so our dealers wouldn’t be caught with any obsolete stock. While we introduced the E2 at the January, 1984 NAMM show, we showed a prototype that was barely completed and was nowhere near ready for production.

The announcement of Drumulator competition, particularly the Sequential DrumTraks with MIDI capability, heavily impacted sales, and with the E1 out of production, our revenues crashed. There was still a ton of software to complete for the E2, and the project was running late. Our worst mistake was to try to get a quick fix product. We purchased the design for the E-drum. 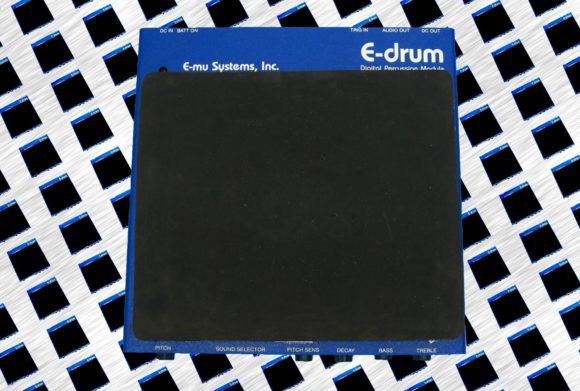 The E-drum not only consumed resources that should have been used to speed up completion of the E2, it was a complete catastrophe. It was plagued by reliability problems, despite its poor sales. As a result of the low revenues and the E2 not being in production, E-mu made massive cuts in the spring of 1984.

This was E-mu‘s first layoff, and it took a huge emotional toll on all of us. My son had just been born, and now I had a business seemingly on the brink of failure. People with confidence in me were losing their jobs. While it was difficult, it ultimately turned positive. I received great support from my wife and friends; they reminded me that I was not my business, that that I was loved for who I was, not the money I made. The most touching thing was when several of the employees who had just lost their jobs came to me and said „Dave, we’ll be fine. You just need to make sure E-mu survives for us.“

Peter:
It seemed to me like you had your final breakthrough with the release of the Emulator II in 1984.

Dave:
The Emulator was designed into a vacuum: nobody had any experience with sampling keyboards. We were able to use our experience with the E1, as well as all the customer feedback, to design the E2. The E1 was a conceptual and technological breakthrough; the E2 was truly a breakthrough musical instrument.

Peter:
You sold the Emulator II more than 3000x – as far as we know. Actually, every popular music producer and many well known musicians used one of those, right? The Emu II became standard overnight in the music scene. Why? Dave:
Scott used to talk about the „congruence“ of an instrument – when all the various aspects fit together in scope, and created an integrated whole. The Emulator II did exactly that. The size of the sample memory, the ease of use (particularly when we added the hard disk option), the sonic capabilities, and the MIDI control all worked together, and no single aspect of the instrument was noticeably weak.

Although the sounds were still 8 bits, our companded sigma-delta encoding scheme gave us better than 12 bit fidelity in most cases. We designed the instrument from the ground up around multi-sampling and layers. But I think what musicians loved most about the E2 was the effectiveness of the analog voice, with velocity sensitive envelopes and filters, in giving the samples organic, musical dynamics.