Does the world really need another monosynth? 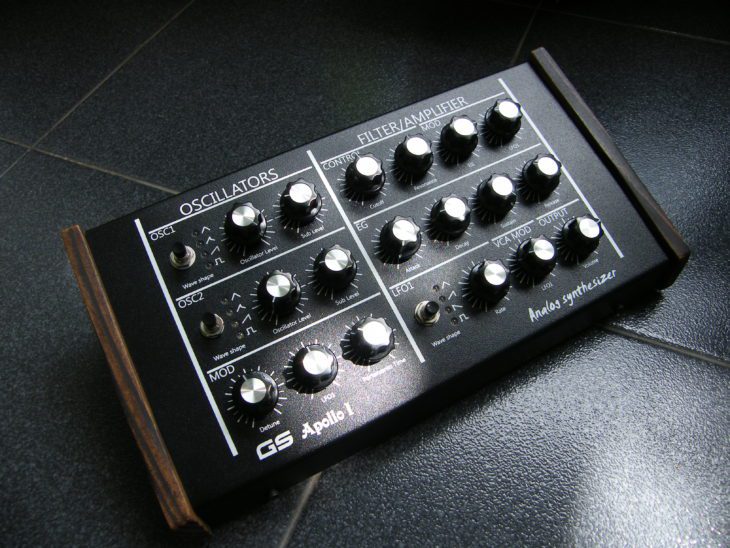 GS Music is a small boutique synth manufacturer from Buenos Aires, Argentina. Run by Guido Salaya, a young Electronic Engineer, GS Music is a one product company, but with some ambitious plans for the future (which I can´t tell!).
Guido has always been fascinated by music and electronics, but it wasn´t until an advanced stage of his engineering career that he decided to join both fields.
He began with a small synth called Tauro, obviously inspired by Moog Taurus circuits, in 2014. It had DCOs though. A simplified version of Tauro was made next year, called Uranus.
With all the experience gained with those synths and other prototypes, Apollo 1 was born in 2018 as a commercial product.
The Apollo 1 it´s a monophonic analog synthesizer with digital control. Don´t be fooled by the panel size, there are quite a lot more elements under the hood… two ADSR envelopes, 3 LFOs, and more. Everything under MIDI control. All control signals are digital, but very fast ones. You probably won’t feel them as digital because they respond really fast and smoothly.
That allows having external MIDI control of every parameter, and patch saving. 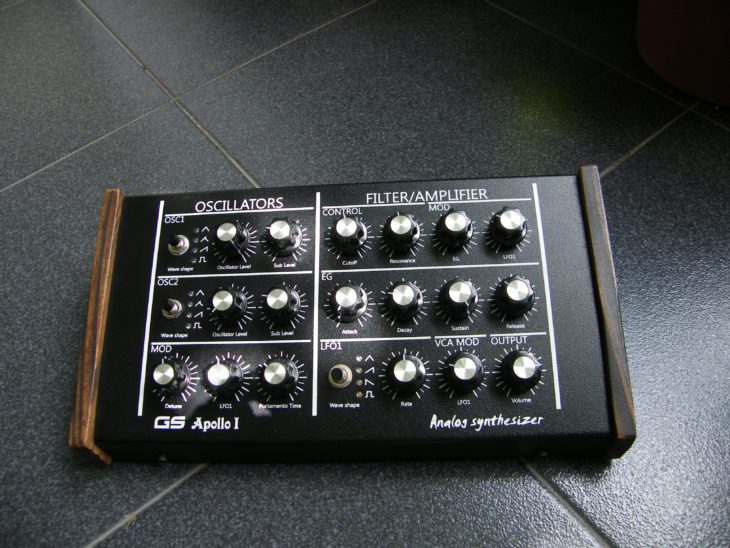 The general build quality is excellent, very solid. The case is made of metal, with wooden side panels, 18 moogish knobs, and three switch buttons.
You can choose the wood type of the side panels, between Nogal, Caoba, and Kona. The one I have here is Kona, and I have to say it looks great. Some people complained about the graphic design, and yes, the font selection and some graphic decisions could have been better in my opinion.
On the back, you have your standard MIDI in, out, thru, Audio Out, power supply input and power switch. Yep, no USB MIDI, and no CV/Gate inputs, and no audio in, which most monosynths have these days.
Each of the knobs transmits MIDI CC information. The resolution is really good, and the cutoff knob has very little stepping, even with high resonance. 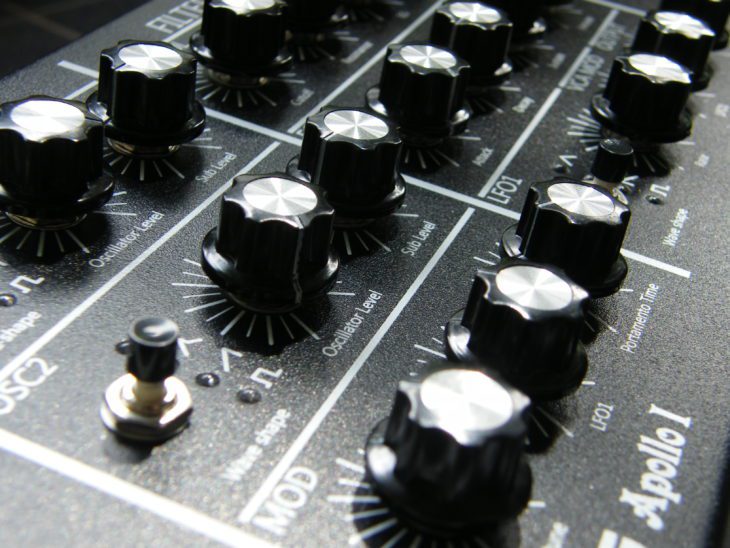 To begin with, there´s two fully analogue VCOs, each with its own Sub-Oscillator. Triangle, Saw+Tri, Sawtooth, and Pulse waves are available. Sub-Oscillators consist of a Square wave an octave below the pitch of the main VCO. Oscillator 2 can be hard synced to Oscillator 1, by quickly pressing both Wave Shape buttons simultaneously.
By pressing both Wave Shape buttons for a second or so, an autotune routine tunes both oscillators.
There´s a Detune knob which works in an unconventional way. In the middle position, both oscillators are tuned in unison, when you turn it to the right both VCOs begin detuning themselves apart in equal proportions, retaining the central average tuning. At a certain point, VCO 2 begin jumping in semitone intervals up to an octave. When you turn that knob to the left, exactly the same thing happens but in the opposite direction.
Full control of oscillator tuning is possible via MIDI CCs, with Transpose and Fine Tune for each VCO.
Every Oscillator has its own Level knob, as well as their Sub-Oscillators, but the Subs are mixed to their main Oscillators so their final volume depends on the VCO knobs, you can’t listen to the Sub alone.
The lack of a Noise generator is a big loss, especially for percussion sounds. Ring Modulation is also missing, as well as any form of Frequency Modulation. And even though there´s Hard Sync, the absence of any way to modulate VCO 2 pitch with an envelope makes it a little bit not that useful. LFO modulation of Pulse Width also seems like an important omission.
The panel features a MOD section with the Detune knob mentioned earlier, and LFO 1 and Portamento knobs. LFO 1 controls the LFO 1 influence on both VCOs, while the Portamento obviously controls the Portamento time.
But that’s not all. MIDI CC controls allow you to control:
VCO1: Transpose, Tune, Shape, PW, Level, Sub Level, LFO 1 Mod, LFO 2 Mod, LFO 3 Mod.
VCO2: Transpose, Tune, Shape, PW, Level, Sub Level, LFO 1 Mod, LFO 2 Mod, LFO 3 Mod.
VCO 1+2: LFO 1 Mod, LFO 2 Mod, LFO 3 Mod, Glide On, Glide Time, Detune.

The VCOs sound exquisite, they phase superbly with each other, they´re very clear, the tuning is excellent across the whole range. 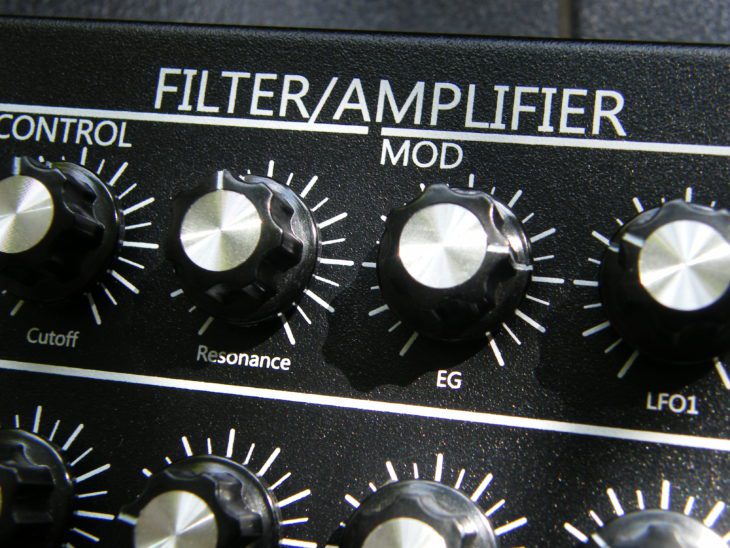 The filter on the Apollo 1 is a 4 pole, Moog-type transistor ladder VCF. It sounds beautiful. It has weight, it has presence, personality.
Even though it’s based on a Minimoog filter, the circuit was modified and fine-tuned, so it has its own sound. As expected, resonance takes out much of the bottom end as you increase it. That’s how transistor ladder filters behave, and this is not an exception. It was never a problem for me, just raise the volume a little. Similarly to a Minimoog, the Filter stops auto-oscillating from around 190 Hz and below (Minimoog goes a little lower).
The Filter section consists of Cutoff, Resonance, EG and LFO 1 knobs. EG determines the modulation amount of the Filter Envelope, but in this case, it works a bit differently than most synths. The Filter Env is bipolar, so as you turn the EG knob, the central filter frequency of the filter goes down and the EG peak goes up. I’m not sure why it functions that way, it’s a bit counter-intuitive. I’m told that it might be changed on some newer OS.

Finally, there’s a small VCA section that includes LFO1 and Master Volume. LFO 1 is tremolo, but when you turn it you begin hearing the sound without having to trigger a note. That´s of limited use, and it might be changed on a future OS update, cos it generally works when you press a note. 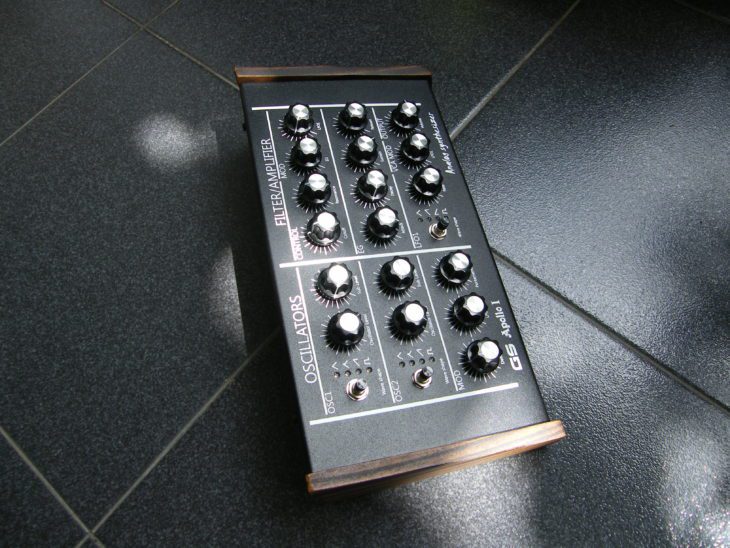 There are two ADSR envelopes available, although it looks like there’s only one on the panel. It doesn’t, you´re actually modifying both Envelopes simultaneously from those knobs. If you want independent control, you have to get a MIDI controller.
I used my Nord Modular G2 to control the envelopes and almost everything else. It’s not a big trade-off after all, since at the end of the day GS Music tried to keep the cost down, and you’ll have to use a MIDI controller anyway.
The envelopes are excellent, they’re extremely fast, they have very musical, natural curves. Attack and release can be modulated by velocity, which gives a lot of expression.

The 3 LFOs are identical, there are 4 waveforms (Triangle, Ramp, Saw, Square), and they go up to audio range (100 Hz). They can be free running, they can be retriggered by a MIDI note, sync´ed to MIDI clock, and sync´ed to MIDI + retriggered by MIDI note. A Sample & Hold waveform could’ve been handy.
All LFOs can modulate simultaneously and independently each VCO, VCF, and VCA. That’s a lot of flexibility. Imagine each oscillator with different vibrato, plus another LFO modulating the filter slowly. 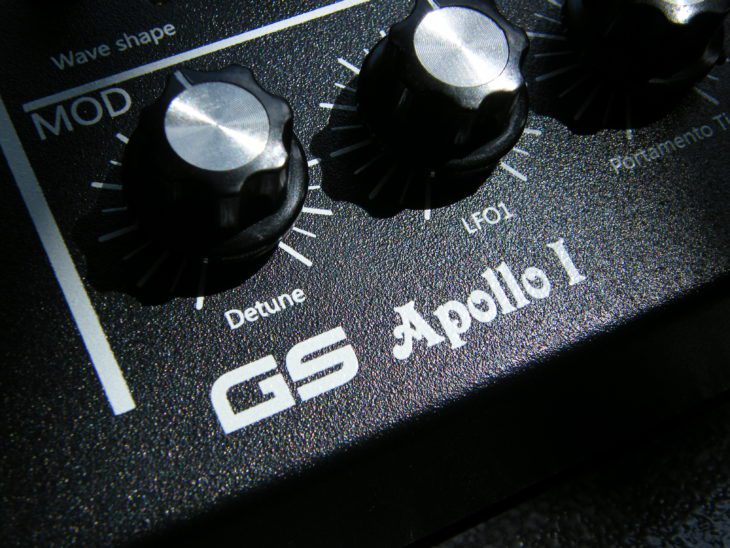 Having full digital control of the analogue elements, the Apollo 1 can store up to 32 patches. Everything will be saved, including the parameters modified externally via MIDI. That is a great feature for live use.
One big omission is the possibility to backup your patches. It simply cannot be done.
Sooner or later someone will probably make a patch editor in CTRLR platform or any other. It’s a relatively easy task, as there´s no sysex involved, and it’d allow patch saving within your DAW project.

Among the various configuration options, there’s a polychain mode, which makes possible to chain various Apollo 1 synths to perform as a polyphonic synth. Since every parameter can be controlled externally, you can use the first synth of the chain to modify the sound of all the others.

So… does the world really need another monosynth???

What question is that?? Of course it does! nobody would ever make such a question about “another” beer brand, or another pizza restaurant.
To begin with, each synth has its own sound, and the Apollo 1 is not an exception. And what a sound! Full, vibrant analogue tone. You simply can’t dislike its sound, unless you just don’t like analogue timbres.
You can make fantastic basses, beautiful leads, great sequence type sounds, and a lot more. Bass sounds range from sub to resonant, from aggressive to warm al dark. The extremely fast envelopes allow clicky attacks, perfect for this kind of sounds.
On top of that, it have such a portable format, so practical for live use. It’s completely stable, bug-free, there’s no background noise, etc.

Maybe what’s objectionable is the lack of physical control, because what’s inside is three or four times the stuff that’s on the surface, in terms of parameters. A good MIDI controller might put an end to that problem really quickly.
The fact that every parameter can be modulated, open a big door for modular type sequences. With the aid of a step sequencer like the one on the Nord G2, you could have one step sequencer sending CC data for each parameter you´d like. Each step could have different VCF Env attack, VCF EG depth, vibrato, Portamento, etc, etc, etc. That is really impressive.

Another flaw might be the absence of more complex synthesis techniques, not uncommon on monophonics, like multimode filter, FM (cross mod), Ring Mod, and Filter FM, etc. To be honest, I didn’t feel I was missing them, maybe because I have others that can do that, but nowadays what I look most in a synth is the pure sound… if it´s great I don´t need that much features and complexity. I find this is the typical case in which the sonic result is greater than the sum of its parts. Somehow it sounds more complex than it should. Sometimes something unexpected happens as the result of some oscillator phasing, or some harmonic destroyed by the resonance, etc.
Probably, the nearer competition could be, both on look and features, the Moog Minitaur. Having both side by side, I prefer the sound of the Apollo 1.
For some reason, it took me to a musical direction towards Berlin School style (as my demos might expose). But I’m pretty sure that in the right hands it can do symphonic rock, Jazz, EDM, or whatever, beautifully.

I mainly work on advertising and tv music here in Buenos Aires, Argentina. I´m a synth programmer/producer with a near 90 synths/samplers arsenal.
I also do teaching on a music production institution. I wrote user manuals, made demos and did design work for German boutique synth manufacturer Anyware Instruments.